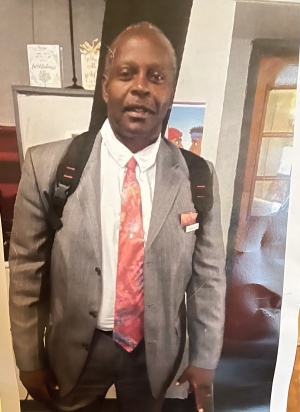 Deacon Jerry L. Jones, affectionately known as “Bassman,” was born to Ms. Mamie Ruth Jones on December 31, 1958. He confessed Christ at an early age and joined 23rd Street Baptist Church, Ensley. While there, he was ordained as a deacon in the church and served as director for the Male Chorus under Rev. Dr. C.J. McNear. After leaving 23rd Street, he united with First Baptist Church-Fairfield, where he served as deacon and bass guitarist for 14 years under the leadership of Rev. Robert G. Twyman. Finally, he united with his current church, New Pleasant View Missionary Baptist Church. He actively served as chairman of the deacon board and bass guitar player under the leadership of Rev. Roger Malone. Deacon Jerry Jones was a 1977 graduate of Ensley High School, where he served as Lieutenant Colonel of the Ensley ROTC program. Upon graduating high school, he attended Lawson State Community College and earned an associate degree in Electricity. While there, he served as Vice President of the Student Government Association and was also an Electrical Instructor teaching the National Electric Code. He was a member of The Motivation Band as a bass guitarist for several years. Deacon Jones united in Holy matrimony to Dr. Felecia Brooks-Jones. Their children, Joshua Sharod, Jeremiah Rashad, and Jerrica Alecia Jones were born to this union. He was employed with Golden Flake for many years. After leaving Golden Flake, he worked for Craft Electric Company, Topolski Electric Company, and several others. He was also the head electrician for the Birmingham Sheraton Hotel for 8 years. He later branched out and started Jones Electric Company until the City of Birmingham hired him as an Electrical Inspector.  During his employment with the City of Birmingham, he served as Assistant Chief Electrical Inspector. Deacon Jerry Jones was known to his family, friends, and coworkers as a strong Godly man with a sweet spirit who also was a huge Alabama and Pittsburgh Steelers fan. He mentored several apprentice and master electricians and contractors. He departed this life on May 21, 2021. He was preceded in death by his mother, Mamie Ruth Jones; foster mother, Ms. Hattie Mae Simmons; grandmother, Elmira Pennington; and other uncles, aunts, and cousins. He leaves to cherish his memories, a loving wife of 37 years, Dr. Felecia Brooks-Jones; three children, Minister Joshua Sharod Jones, Jeremiah (Jenequa) Jones, and Jerrica (Roderick) Jones-Washington; grandbaby, Ja’Mya Jones; mother-in-love, Corine Brooks of Birmingham, AL; brothers, Alfred (Deborah) Jones of Birmingham, AL, Calvin (Sylvia) Jones of Adamsville, AL; two sisters, Apostle Patricia (Robert) Powell of Anniston, AL, and Ms. Ivy Jones of Birmingham, AL; aunt, Mattie Walker of New York, NY; brothers-in-law, Reverend Manasseh (Felita) Hawkins of Birmingham, AL, Carlton (Sonja) Brooks, Marriottsville, MD, Minster Stephen (Rose) Brooks of Fort Lauderdale, FL,  and Austin Brooks of Hueytown, AL; several nieces and nephews and a host of other relatives and friends.

To send flowers to the family or plant a tree in memory of Deacon Jerry L. Jones, please visit our floral store.